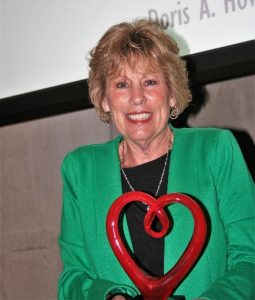 In an emotional ceremony, California State University San Marcos (CSUSM) awarded its third Doris A. Howell MD Award for Advancing Palliative Care. It was only natural that Christine Knutson, RN, MSN, received it. “You already know I knew Doris, so this tribute to her is more than special”, commented Christine in her acceptance remarks. She is also a pediatric oncologist and has dedicated the majority of her career to ensuring palliative care is integrated as part of advanced care planning for individuals with a serious illness. According to her bio on the San Diego Coalition for Compassionate Care, Christine has been a registered nurse for over 40 years, and has several decades of experience in home health care, hospice, long term care and community education and outreach.

Christine was introduce as “truly one of the prime movers and pioneers of palliative care in the San Diego region”, with a passion about advanced care planning as well. She served at San Diego Hospice (where she met and worked with Dr. Howell) as Director of Education and Outreach for the hospice at the North Coast as nurse educator and consultant to care access. As stated, the direct line to Doris Howell is very touching.

She was an important part in the founding of the End of Life Coalition for Improving End of Life Care group that was started in the early 2000’s. The guiding principles of the group included making healthcare better, reaching communities, educating and promoting advocacy for palliative care. It was the first time that all 18 hospices in the San Diego community were in one room.

And where else but in the conference room at Dr. Howell’s residence. “So many remember her as a person who moved forward, and was so supportive of likeminded individuals who wanted to make a difference. We have an ethical and moral mission to provide palliative to move things forward. And as Doris would say, speak from your heart, do the right thing and it will all unfold. I know she is looking down and more than grateful that everything is continuing to move forward.”

Congratulations Christine, and thank you for moving hospice and palliative care standards forward!

Dr. Doris Howell through the eyes of Helen McNeal, former Executive Director of the Institute of Palliative Care at CSUSM

If there is any doubt about the influence Dr. Howell had in the area of advancing palliative care hospice care, the wonderful tribute by Helen McNeal, founder and former Executive Director of the Institute of Palliative Care, speaks for itself! 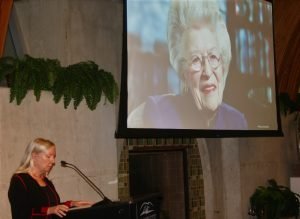 “The last time I stood at a podium in this room I was looking at Doris Howell because we were launching the Institute. You know, there are people you meet in life who, from the moment you meet them, live on in your heart, and Doris Howell was one of those people. And not just for me, but for anyone who had the pleasure of meeting her. She greeted you with eyes that saw who you were at heart and welcome you warmly.

Right from the very beginning, Doris was someone who set a very high bar for herself and then set out to soar over it, and sore she did. Having lost her father at an early age, things were not easy for Doris and her mother. But Doris recognized that her calling was one of caring. Initially, I think she thought she would be a nurse, but someone pointed out to her what the doctor did and she set a higher challenge for herself. In her day, very few women went to medical school and became doctors. She not only went to medical school in McGill University and became a doctor, but she took on the medically and emotionally challenging specialty of pediatric oncology. For many women of her day, that would have been enough. For Doris it was just a start. Not only did she take on caring and the most challenging specialties, she became an educator of other doctors and she was on the faculty at the medical schools of Duke and Harvard Universities.

But once again, she had only just started to soar. By the mid 1960’s Doris was Chair of Pediatrics at the Medical College of Pennsylvania. In 1968 she met Dr. Cicely Saunders, one of the founders of modern hospice at St Christopher’s hospice in London. She came to the US to encourage the establishment of hospices in this country. As a pediatric oncologist, she had seen the worst of suffering associated with end of life. Doris was hooked as she recognized the need for hospice palliative care; and she knew what she had discovered was a better way. Anyone who knew Doris knows that you didn’t just get hooked. When she got hooked, she went out and did something about it.

She was part of the team that immediately set about to establish a hospice in the Philadelphia area. And that was just the beginning. In 1974, she joined the Faculty of UCSD and became the first pediatrician to chair the Department of Community and Family Medicine. She brought with her not only her skills and expertise, but also her passion for hospice and palliative care. She spearheaded the creation of San Diego hospice in 1977 as a community based hospice program and led it through its very turbulent, early years, helping to give it a very firm foundation that would establish it as one of the leading programs in the world.

Most of you know the story of her encounter with Mrs. Joan Kroc on an airplane. I would love to have been there for that. As wonderful as that story is though, what is more telling to me about the character of Dr. Howell is that when Mrs. Kroc first offered her the money that would put the hospice on a solid footing, Doris turned it down saying that if the hospice couldn’t prove that it could survive with what had it didn’t deserve the additional money. That was not about bravado to me that was about character. At the end, the funds provided by Mrs. Kroc went directly to San Diego Hospice under Doris’ leadership.

She supported excellence in care, and was also dedicated to advancing research, to change care globally, and to further education that would enhance the skills of palliative care providers throughout the world. As I look at it, the faces here today and some of those who shared my experience with being part of San Diego hospice and the Institute for palliative medicine.

I know one very, very important thing. While San Diego hospice may no longer exist as a place or as an organization, it lives on in the hearts and caring practices of thousands of people who work there, who trained there, and who carry on Doris’ legacy of advancing palliative care –not only in San Diego but throughout the world.

When I was putting my thoughts together for this afternoon, I realized that I simply could not put the name ‘Doris Howell’ and the word ‘retirement’ in the same sentence; much less in the same paragraph. While Doris stepped away from practicing medicine, she continued to be passionate about changing healthcare both, through hospice and palliative care with her continued involvement in San Diego hospice and the Institute for Palliative Medicine, and through her Foundation, where she supported her other passion: women’s health. And based on what we’ve been hearing today about all these powerful women, I think we all also owe her a debt of gratitude for being so concerned about our health.

Through the work of her Foundation she has done much to advance both, research in women’s health and knowledge in the community. For example, in conjunction with the CSU Program for Education and Research and Biotechnology –known to many of you is CSUPERB—and through UCSD Medical School and the Hahn School of Nursing as USD, the Doris Howell Foundation has provided 241 scholarships and contributed over $680,000 towards boosting undergraduate student research efforts. In addition the Foundation has awarded six Community Engagement Initiative grants to support partnerships working collaboratively to develop and evaluate programs designed to improve women’s health within the Greater San Diego community with an emphasis on underserved and at risk woman.

For all these activities, Doris received many awards in her lifetime. If you include National Award for Leadership and Service from the American Academy of Pediatrics, the Humanism in Medicine Award from the Healthcare Foundation of New Jersey, the McGill University Lifetime Achievement Award, and the Salvation Army’s Women of Distinction Award and for me as importantly, she will always hold a very special place in the people and in the hearts of the people that knew her.

What I hope you’ve heard by now is that Doris was not only a very special person in her own right, but she is truly a role model and advancing hospice and palliative care. In 2016, those of us then at the Institute and envisioned creating an award for Hospice and Palliative Care Practitioners and it was clear to us that that award should be named after Dr. Howell. She raised the bar on herself and others with the objective of improving care for patients and families. She didn’t just have dreams and passions. She worked hard to make her dreams and passions of reality. She didn’t just have skills and expertise. She brought them along with her personal drive and energy and made a difference here in San Diego and around the world.

She welcomed patients, friends, staff she worked with an unmistakable warmth and immediate real interest in them and in their well being. I think for many of you, she embodied the very best in a hospice and palliative care practitioner. In just a moment we will recognize another very deserving individual committed to advancing hospice and palliative care. But as we do so this year and in every year to come, we’ll be remembering and recognizing that original American hospice and Palliative care provider, Dr. Doris Howell. I want to end by asking you to help along with me, to make a commitment that we may all strive to honor her memory, making our passions a reality, raising the bar on the work that we do, making a difference in our community and welcoming everyone with genuine here and acceptance. Let’s make Doris proud.”

The Doris A. Howell Foundation for Women’s Health Research has been dedicated to keeping the women we love healthy by making a long-term, positive impact on women’s health. It is the premier organization advancing women’s health.

The organization does so by: