Dr. Linda McEvoy, guest speaker for our August webinar “What Science Tells Us about How to Stay Cognitively Healthy as we Age” walked us through the changes the brain goes through as we progress in life, and why women are more prone to cognitive decline. She is one of the Principal Investigators of the Rancho Bernardo Study, a local research project leading the way in cognitive health and aging at a national level. As a matter of fact, it is one of the longest, continuously funded, NIH observational studies in the US.

Older women outnumber older men. Women tend to bear the burden of having a bigger risk for dementia and are more often the caregivers of other people who have dementia. Women didn’t use to engage in education, sports or an intellectually challenging job as men, and it is now reflecting on their brain health. Cognitive decline and dementia as it relates to aging IS a women’s health issue.

Dr. McEvoy explained how the brain ages, the behaviors that promote brain health, the risk factors we face, why women are more prone to cognitive decline than men, and importantly, presented the latest research in the field.

The basics: Not every brain is created equal when discussing cognitive decline.

There are a set of indicators to be taken into account to be able to identify the state of our cognitive health that go beyond “person, man, women, camera, TV,” for sure.

Dementia is not part of normal cognitive aging, but rather a disease. It is defined as a clinical syndrome of cognitive impairment of sufficient severity to interfere with activities of daily life. The risk for dementia increases with age – about one in ten people aged 65 or older have dementia. The risk increases as we age to one in three.

Some of our cognitive functions decrease as we age, while others increase. Cognitive health greatly relies on our processing speed. As we age, our ability to do things quickly declines — including our thinking – and tests such as those related with vocabulary, reasoning and (especially) memory clearly indicate how our cognitive abilities are aging along with our chronological age. Among the cognitive aspects that increase with age are knowledge-based facts—such as vocabulary and tasks we learned throughout our lives. Amazingly, processes related to procedural memory increase — like learning something new.

Cognitive aging is not uniform. Based on three metrics in Dr. McEvoy’s research — executive function (a task relying heavily on our frontal lobe and integrate across the brain), semantic fluency and verbal episodic memory — we know that women: 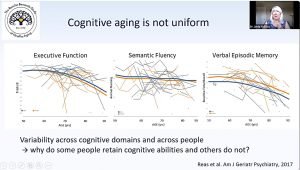 What’s good for the heart is good for the brain. The brain is very active metabolically and anything that affects our body health will affect our cognitive health. The level of physical activity, the quality of the blood supply to the brain and hypertension are among examples of issues that will make the difference between a healthy cognitive aging process and a difficult one.

Use it or lose it. Brain activity is important for maintaining cognitive health. Specialized logical functions are classified as cognitive activity. The more brain active we are, the more cognitively healthy we’ll be.

How our brain works as we age.

Let’s start with the ability to integrate and process information as we age. Our brain will function based on how information is perceived and how such information is transferred across the brain, from one area to the other, through specific “pathways.” The integrity and synchrony of the neurons and these pathways are critical and will affect our cognitive health.

“Anything that disrupts the ability of the brain to function in synchrony, rapidly and efficiently, is going to impair our cognitive abilities,” comments McEvoy. Examples include “white matter” lesions, hypertension and lack of oxygenation to the brain (hypoxia), among others. The brain also shrinks as we age, which in turn causes this neuronal integrity to be compromised. 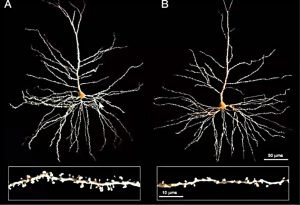 Although neurons will not die as our brain ages – unless you have a disease like Alzheimer’s – there is a decrease in the ability to create connections between neurons. These connections are based on synapses (nodules). When we age, these synapses prevent the information traveling in the network. Synaptic junctions are an integral part of communication between neurons.

New neurons are integrated into our brain network and come as a result of concrete actions such as being cognitively, socially and physically active. “The more neurons you can generate, the stronger neural network connections you’ll have. And the better you will be in maintaining your cognitive health as you age.”

The 6 most important things to protect our cognitive health as we age.

Higher education is associated with a decrease in cognitive decline and a reduced risk of dementia. Research has shown that education protects our cognitive health by building neural connections that will build up our cognitive reserve. “The more you’ve used your brain when you’re younger through your educational activities, the stronger cognitive networks you develop.

While genetics play a role in whether we develop Alzheimer’s or dementia, modifying our behaviors can modify our risk. Research continues to show that additional lifestyle behaviors positively affect our cognitive decline as we age:
• Physical activity doesn’t have to include an intense work out. It reinforces the need to avoid a sedentary lifestyle, which can eventually lead to other health complications.
• Higher social engagement and being understood within a social network will avoid loneliness from social isolation, proven to contribute to cognitive decline.
• Adherence to diets high in fruits, vegetables, legumes, fish and low in dairy and red meat and mild to moderate alcohol consumption have been associated with a reduced risk of dementia.
• Brain training goes beyond the recommended games like a crossword puzzle or Sudoku. Daily activities that challenge our reasoning skills and processing speed will protect our brain.
• Having a higher purpose in life has a positive, direct relation to cognitive health.

The known risk factors and what current research shows has the potential to affect cognitive decline.

Aside from the genetic predisposition to cognitive impairment, Dr. McEvoy reiterated the risk factors in cognitive decline: “Diabetes, obesity (particularly during mid-life), cardiovascular disease and associated diseases like hypertension and atherosclerosis – anything that eventually interacts or interrupts your blood supply to the brain has been found to be associated with increased risk of dementia and is going to affect your ability to maintain cognitive health as you age.”

From a public health perspective, just as studies have shown that life expectancy varies between neighborhoods, pollution or stress, it is becoming clearer that social disadvantages play a role in increasing our risk for cognitive decline. Education plays a significant role: “With a better education, you’ll likely have a better job. You have greater access to healthcare, to healthy foods, to more knowledge of these healthy factors that affect aging. It’s a multifaceted way in which education affects our cognitive function and our risk of dementia – in a really important way.”

Dr. McEvoy is excited about current studies that address the risks of cognitive decline. In her Rancho Bernardo study, Dr. McEvoy continues to study how hearing impairment contributes to cognitive decline, and whether a hearing aid can decrease the risk. She is also looking into a recent Alzheimer’s Association study indicating a correlation between the flu vaccine and cognitive abilities.

Women and cognitive decline: are we still getting the short end of the deal?

Dr. McEvoy provided an insight on why women may be more susceptible to cognitive decline than men. Having covered the science, risk factors and positive behaviors that affect brain health, she provided additional research from that highlighted cognitive decline as it relates to public health and societal factors, with consequential medical outcomes for women: 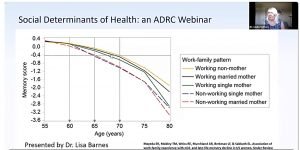 “We have had different people talking about some of the social determinants of health. Dr. Lisa Barns’ research showed non-working mothers had worst memory performance with age, then did the mothers who are working.”

A celebration of Public Health efforts

“I celebrate the public health factor — it has been quite a nice success story, and I hope that we can keep up with this and maintain focus on the health of our community. Where we end up, cognitively speaking, will depend on where we began: what we were endowed with genetically, what kind of prenatal environment we were exposed to, and what happened to us in our childhood years and all through life. So really, cognitive aging doesn’t start when we’re older. It’s important to be healthy throughout life” concludes McEvoy.

As individuals are continuously focused on a healthier lifestyle, research leading to medical discoveries continues to evolve. We cannot move mountains for women’s health, but we can surely contribute with our grain of sand. The Howell Foundation’s Scholarship Program is how we contribute to the health of women in our community — at the research level. Our outreach program (Lecture Series) seeks to present women with reliable, science-based research that takes place so women, in turn, can make informed decisions on their health and the health of their families.

For more information on the Howell Foundation’s programs, or if you would like to make a donation, please visit www.howellfoundation.org.