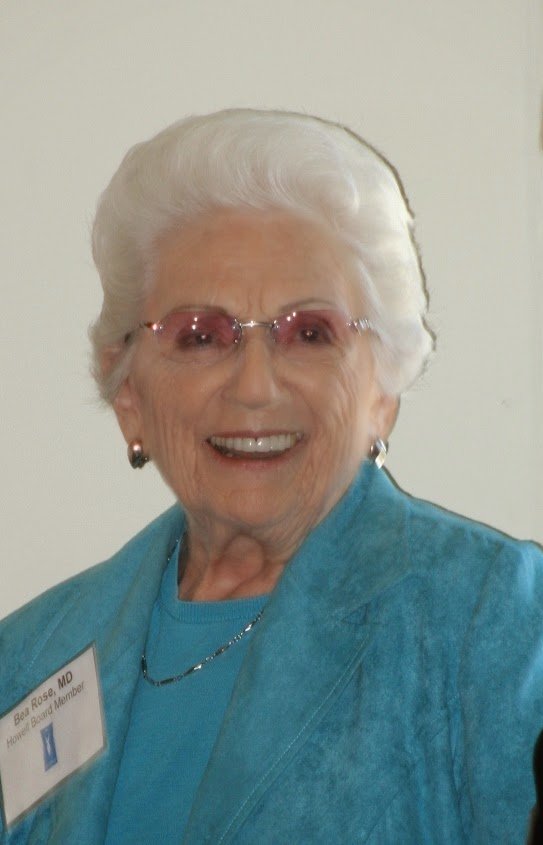 The Doris a Howell Foundation named its first Emeritus Board Member this year, Dr. Beatrice Rose. She however, is used to being ‘the first’ at many things. Like few in her generation, she defeated the odds of becoming a physician while still listening to her mother, who at the time wanted Rose to be a teacher. So she became both.

“I lived at a time and place where I was able to be the ‘first’ in many things. I just did what I thought would be a good idea at the time.” She was the first woman to be appointed to the Oregon Board of Health in the State’s history. She was also the first woman voted in as a Delegate of the Oregon’s State Medical Society and became the first recipient of the County Medical Society’s Award for Service to Public Health.

Her philosophy is simple: do the best that you can or don’t even bother — a belief that is shared with Dr. Howell, whom she met in 2004. “When I met Doris it was like as if we had always known each other. She set THE standard and is able to attract people that want to live up to that standard.”

She gladly accepted the invitation to assess the research proposals submitted for consideration to the Howell Foundation’s Scholarship Program. Quite impressed by the scholarship review process, she accepted Dr. Howell’s invitation to become be part of the Board. She still evaluates applications and constantly praises the scientific depth of the research projects that are submitted for review.

A longtime resident of Oregon, she moved to San Diego in 1994 due to her health problems. With the sense of humor that characterizes Dr. Rose, she recalls being told that people in La Jolla actually stopped to let pedestrians cross the street. But while she got better, unfortunately her husband Leonard did not. She was married for 57 years and reflects on the happy and difficult times of losing the love of her life-long partner and her daughter, for whom she established the Susan G. Rose Scholarship at the Howell Foundation.

“When you grieve, you are increasing their immortality” she comments, and then goes on to remember how she met Leonard in 1947. Few of us would have thought of attending the first American Heart Association’s meeting as a date. Perhaps for Leonard inviting her to listen to the latest research meant winning Beatrice’s admiration. He was a cardiologist and certainly knew his way around her heart!

Recognized for her poems, today at 99 Dr. Rose still writes for her friends as a way of letting them know she’s thinking about them. You will find her attending the Howell Luncheon Series’ alongside with the scholars that are recipients of the Susan G. Rose Scholarship, in memory of her daughter who, as head of Lariam USA, dedicated most of her life educating the military community and others about the severity of the side effects of the anti-malarial drug. Her pro-bono work is her legacy, and it is still creating awareness on the devastating use of Lariam nationally and internationally.

She meets regularly with the Science Study Group that she formed in 1997 under the auspices of the San Diego Independent Scholars –of which she is a member– to study the mysteries of the brain. Citing Dava Sobel’s ‘Longitude’, she’s deeply moved by the phrase ‘time is to a clock what the mind is to the brain.’ “The problem today is time. Everything is immediate, and if it’s not, then it is not worthwhile in many minds. But time is something real… we can’t touch it but it is real. So just take the time.”

When asked what the secret of her longevity is, she offers this piece of advice: “When you live long enough you learn that life is a joke, and at the end, you learn the joke is on you!

The Doris A. Howell Foundation for Women’s Health Research has been dedicated to keeping the women we love healthy by making a long-term, positive impact on women’s health. It is the premier organization advancing women’s health.

The organization does so by: