25 years ago, Soroptimist International of La Jolla helped establish the Doris A. Howell Foundation for Women’s Health Research to recognize Dr. Howell – Doris — for her relentless work in advancing women’s health. It was only natural that Dr. Howell pursue a solution to the fact that research results from male studies were being extrapolated to women’s diagnosis and treatment, often putting the health of women at an additional level of risk.

To understand the philosophy behind the Foundation, one needs to have known Doris. The word ‘trailblazer’ comes to mind. As cliché as it might sound, she really was a first in many ways. She was expected to be either a teacher or a librarian. Anyone who knew her knows that she just went after her dreams. It was after a surgery when she ‘informed’ her grandmother that she wanted to be a nurse. And I say ‘informed’ because I believe that she really didn’t ask for permission.

Her grandmother, an influential woman in her life, wasn’t really impressed. A nurse’s job those days was menial – ‘scutwork’ I believe was the word used– and thought that, once she realized that she wouldn’t be able to become a doctor, she would become a great teacher or librarian – oh, the power of reverse psychology! But her family didn’t count on Doris’ tenacity.

After attending college in Parkville, Missouri, Doris was accepted at McGill University in Canada. Back then, female medical students were, well, very rare. She later became an internationally renowned pediatric hematologist & oncologist. She was a Faculty Member at Harvard and Duke University Schools of Medicine, Chair of the Dept. of Pediatrics at the Medical College of Pennsylvania, and on the faculty of UCSD School of Medicine, where she chaired the Department of Community and Family Medicine. 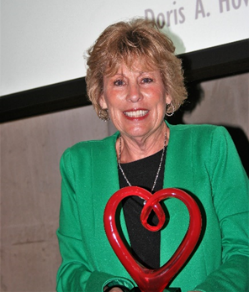 Doris is credited for establishing San Diego Hospice, a model that, to this day, has been adopted as the cornerstone for hospice and palliative care nationwide. In her honor, California State San Marcos’ Shiley Institute for Palliative Care established the Doris Howell Palliative Care Award in her honor.  In the words of 2018 awardee Kristine Knudsen, RN, MSN: “So many remember her as a person who moved forward, and was so supportive of likeminded individuals who wanted to make a difference. We have an ethical and moral mission to provide palliative to move things forward. And as Doris would say, ‘speak from your heart, do the right thing and it will all unfold.’ I know she is looking down and more than grateful that everything is continuing to move forward.”

Doris had a tremendous impact in the community. Just search for her name on Google. In addition to the recognition on behalf of the Mayor’s office in 2013, Dr. Howell was also the recipient of the McGill University Life Time Achievement Award in October, 2013. Tributes to a life-long focus on health and education include numerous awards: the Salvation Army Woman of Dedication Award, the Humanism Award from the Health Care Foundation of New Jersey, and awards for leadership and service from the American Academy of Pediatrics. She has been listed in “Who’s Who of American Women”, and the list goes on.

Throughout her career, Dr. Howell noticed that women cared for family before self. One could often hear her say women didn’t really understand their own illnesses. She truly believed that women played a pivotal role in their family’s health; hence the guiding principle of Keeping the Women we Love Healthy. But back then, the notion of including the female side of the equation in the research that would actually take care of women’s health wasn’t even a concern. It literally took an act of Congress to make sure women were included in research investigation and clinical trials taking place – that is, if any given organization wanted NIH funding to continue its efforts. Dr. Howell’s mission became clear: getting women’s health on the radar.

To bring this story full circle… enter the Soroptimist International of La Jolla, a significant accomplice organization in her efforts! Thinking of a way to further advance women’s health research, Soroptimist, in conjunction with UCSD and the Society for Women’s Health Research, organized a symposium on menopause. Rather than continuing to fund research projects at UCSD, Soroptimist established the Doris A. Howell Foundation for Women’s Health Research in 1995 as a way to recognize her work and the impact it had in the community. And the rest is history!

“Doris Howell was a very important mentor to me. She took me under her wing when I moved back to San Diego to start this job about 13 years ago. And we bonded over our shared experiences as undergraduate researchers. We both credited our early experiences with our career trajectories. We also talked a lot about recruiting and mentoring early career physicians and researchers.

She was always keen to understand the latest literature about effective mentorship and the value of undergraduate research, especially for students currently underrepresented in the biomedical field. She never forgot the mentors, administrators and admissions officers who took a chance on a young woman who wanted to be a physician back in the days when that was not the tradition. So as you all know, Dr. Howell not only kept up with her field, but led her fields.

The Doris A. Howell Foundation for Women’s Health was one of the first nonprofits nationwide that, at it’s mission, supported advancing women’s health by funding undergraduate researchers. Thank you. That’s a big deal! We’ve been very grateful for our partnership. Together, the Howell Foundation and CSUPERB have given $855,000 in awards to 200 students since 2001; the great majority, 87% of them, graduate and go on to apply successfully for medical school, graduate school or work in the bio medical field.”

So there it is: from being told she just couldn’t be a nurse –let alone an MD limited to just a career as a teacher or librarian — this trailblazer was beating the odds in the 40’s and becoming one of the most influential women of our time. Is it really no wonder that the Howell Foundation was to be a success?

And for her, advancing women’s health started with research and ended with education. Sounds familiar? In her desire to get biomedical students excited to pursue a career in women’s health, the Howell Foundation, to date, has awarded over $700,000 earmarked to fund over 250 undergraduate and graduate women’s health research scholarships. The importance of ‘community’ for Doris led to the creation of the Community Engagement Initiative in 2013, which in turn has produced the award of 6 grants totaling 100,000. Can you imagine the number of men and women we have reached with relevant research information through our events and presentations?

But the biggest talent Dr. Howell had was that of inspiration. It is the reason why the Howell Foundation Board Members continue to be inspired to bring awareness to the need for women’s health research and self-advocacy. Dr. Howell built a community where the pursuit of education, the passion for community, and the love for her work are definitely reflected in her legacy of care.

The Doris A. Howell Foundation for Women’s Health Research is dedicated to ‘keeping the women we love healthy’ by making a long-term, positive impact on women’s health.  Since its founding in 1995, the organization has awarded more than 250 undergraduate and graduate research scholarships, and has produced over 100 women’s educational health presentations. In 2013, it expanded its service to include community research grants with an emphasis on women in under-served communities.

By focusing on women-specific issues, the Howell Foundation serves to close the gap in medical research.  By supporting the the research that will improve the care women receive, and by empowering them with knowledge and resources to advocate for themselves, the Howell Foundation contributes to the long-term health of women, their families, and the communities in which they serve.