There are multiple sources of information regarding the status of vaccine clinical trials for COVID-19. The latest polls are showing that, even though the current clinical trials constitute the largest effort in our scientific history, over 40% of Americans are on the fence about getting vaccinated. Understanding new technologies in vaccine development is of vital importance!

The goal of all the vaccines currently being developed against COVID-19 is to create a protein from the virus that our cells will recognize as foreign and to which an immune response will be induced. There are different approaches to this, but both the Moderna and Pfizer vaccines contain a messenger RNA molecule (vs. a DNA one) which encodes the recipe for a major COVID-19 protein. The hope is that upon being injected into our body, our cells will take up the RNA and that it will be converted by our cells into the COVID protein. Our immune system will then recognize the protein as a foreign protein, and produce antibodies against it. If we are then exposed to the virus in the future, our immune systems can mount an immediate and strong response to the virus.

Dr. Mandy Butler, Associate Professor of Teaching Emerita at UCSD and head of the Scholarships Review Committee at the Howell Foundation, is part of the Moderna vaccine clinical trial . She shares her story on what it means to her, and busts the most common myths about the perceived fears of getting a vaccine.

“Being a scientist, I thought participating in the COVID vaccine clinical trial would be an interesting and worthwhile experience.” 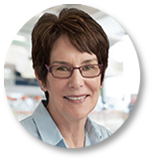 In August of 2020, I saw an article in the Union Tribune about the initiation of the Phase 3 Moderna Vaccine Clinical Trial and their interest in enrolling subjects who were over 65. (Moderna hoped to enroll 30,000 patients and as of this writing, they had enrolled 28,000 people.) I am 67 and have no underlying health issues, and being a scientist I thought participating in the trial would be an interesting and worthwhile experience.

Knowing that the Moderna vaccine was an RNA vaccine, I was not overly concerned about side effects. I therefore went to the website and filled out the initial application online. A few days later, I got a call from the Estudy, the clinical testing lab that conducts trials in many therapeutic areas. They asked several questions about my health and medications and then made an appointment for my first visit to the site in mid-August. I was told the first visit could take as long as three hours. (I was also told I would be paid a whopping $65 for my time!)

At the site, I was asked about my medical history in more detail and informed that I had a 50% chance of receiving the actual vaccine and a 50% chance of receiving the placebo, saline. They also mentioned the potential side effects of the vaccine — which included transient pain, swelling, and redness at the injection site, fever, headache, body aches, nausea, and fatigue. (These were the most common symptoms observed in the phase 1 round of the trial.) I agreed to participate and had to sign several documents related to liability, potential side effects, etc.

They began the process by taking a nasal swab to test for COVID and about ten small tubes of blood, which I assumed would be used to measure my baseline antibody levels. At that point, a doctor came in and injected me – – I was not told whether I received the placebo or the actual vaccine. I was finally escorted to an observation area where I waited for 30 minutes so they could make sure I did not have any extreme reaction to the injection. The monitoring tool for the trial is via an app, which I have downloaded. All told, I was at the site for about 2.5 hours.

I really felt nothing at that point, but later that evening my arm started to hurt enough that I took some Advil. The next day I had some swelling and hardness at the injection site, and it was quite tender to the touch. Other than that, I had no other noticeable reaction.
For the rest of that week, I filled out the online app, which required taking my temperature each day and recording any symptoms. I received a phone call each week for the next three weeks, and then returned to the Estudy site in mid-September. They again took a nasal swab and several tubes of blood, and I again received an injection. I waited 30 minutes after the injection, and this time, I noticed my arm began to itch a little. But I had no other noticeable reaction, and I went home.

“The pain was not much worse than that after getting a flu shot.”

That evening, I again had pain at the injection site, but the pain and the swelling were more intense and lasted about three days. I again took Advil, and although I had some difficulty sleeping because of the pain the first night, the pain was not much worse than that after getting a flu shot. I had to fill in my phone app for the week after the second shot, and I have received a phone call each week to check on my well-being. I will have to return to the clinic in mid-October for more bloodwork and another COVID test.

Over the course of the trial, Moderna will be monitoring antibody production in participants, and comparing the frequency at which subjects in the placebo group versus the vaccine group contract COVID in order to determine if the vaccine works.

Although I still don’t know whether I got the placebo or the vaccine, based on my reaction, my guess is that I received the actual vaccine since the saline placebo would not usually produce a response like the one I had. But if I did get the actual vaccine, I don’t know that I am responding and making antibodies, or that if I am making antibodies, they will protect me from contracting COVID. So needless to say, I am still being very careful until we know the outcome of the clinical trial. All in all, participating in the trial was not that uncomfortable or inconvenient, and I am looking forward to learning the results!