The old age question remains:  why do some people live longer than others?  Do some of us REALLY want to live that long? Is there an intelligent way of aging?

The ‘old old’ may hold all the answers to longevity.  In order to understand the spike in longevity, investigators from the University of Southern California embarked in a research project back in 1981.  It started with a 14 page questionnaire which was sent to 18,000 people.  14,000 were returned.   The average age was 73, and two out of three people alive were women. The group of researchers wanted to understand what factors affected their health.

Why is this important? More of half of the children born today are expected to live up to 103 years old! It is expected that by 2050, 3% of the population will be over 90.

The most important findings of the study and how to age intelligently back in the 80’s included: 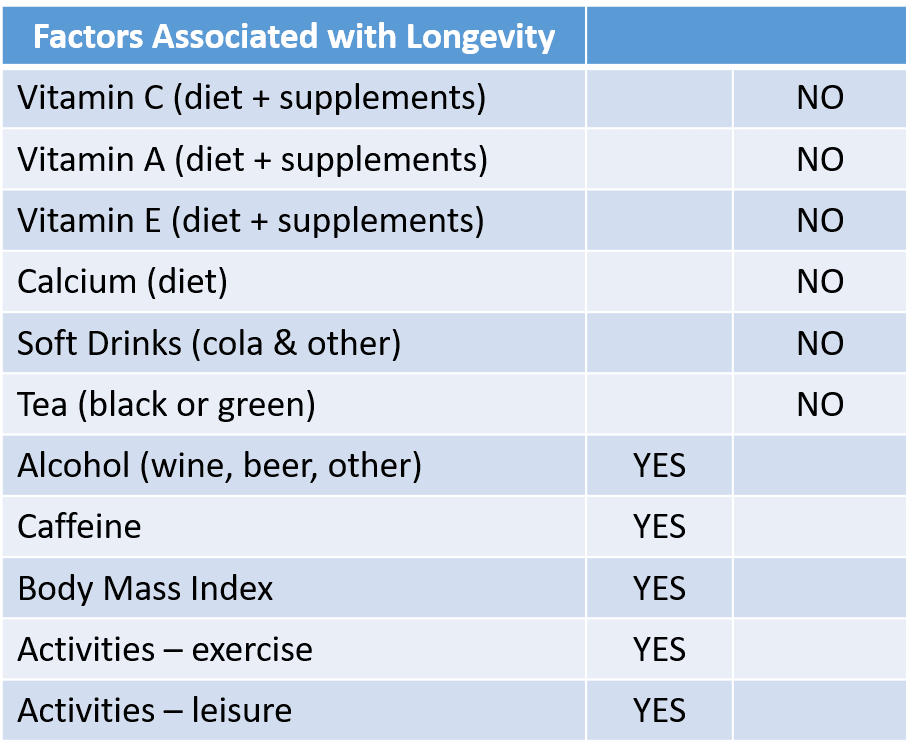 1. Of the most common recommendations to lead a healthy lifestyle, and as to what activities influence our ability to live longer, the results of the study were quite surprising. The factors associated with longevity show that it really isn’t a question of who lives longer, but who lives well; including maintaining a healthy lifestyle.

2. One thing is for sure: of those factors that do increase our longevity, turns out surrounding yourself with loved ones is THE factor to consider if you want to age successfully!  Being social helps to live longer!

3. It is about engaging the brain. Leisure activities that summed up to 8 hours per day made people live longer, and well.

Taking it a step further.

One of the most difficult and dreaded aspects of aging is dementia and Alzheimer’s disease.  Dr. Kawas took her study a step farther.  In 2003, through the University of California at Irvine, she started the ’90+ study’, and asked people that were over 90 –and those who still today turn 90– if she could take a look at their brain from a psychological, physiological and functional perspective to see how it all related to their lives– including PET scans, MRI, DNA tests and blood samples.  The gift of the participants of looking at their brain after they die is what is giving us the insights of how to deal with dementia and Alzheimer’s Disease in the latter part of our lives.

Her research findings continue to impact the medical community today, starting with the fact that aging and longevity are truly a women’s issue. She has been involved nationally in aging studies for over 30 years now, and up until recently, virtually all aging studies did not consider women. Biologically, of every species in the planet living today, females are the ones living longer.   Further more, by age 95, there  are now three women alive for every man.

After following over 1,600 participants, out of the 40% living in some kind of sheltered living, about 1/3 were living alone with little to no assistance.  Cognition wise, the individuals in the study were pretty much divided the same: 1/3 had relatively normal thinking, 1/3 had some problems in their thinking pattern, but not enough to qualify as having full blown dementia, and a 1/3 with dementia.

Being that Alzheimer’s and dementia tend to be the two most dreaded aspects of aging, Dr. Kawas mentioned that the ONLY way to find out about the risks of developing either after 90 is by understanding the pathologies taking course in their brain.

The two are clearly not the same.  Dementia is the decline of the mental ability that is severe enough to get in the way of doing what one wishes to do.  As a matter of fact, there are more than a hundred causes of dementia, where as in Alzheimer’s there is only one:  plaques found between the dying cells in the brain – from the build-up of a protein called beta-amyloid. Read more about Alzheimer’s and women here.

If you live past  the age of 90, what is the likelihood of developing  dementia?   The risks are astonishingly high: If you are between 90 and 94 years old, the risk of dementia is 10%; from the ages of 95 to 99, the risk doubles to 20%.  If you are 100+ years of age, the risk of dementia goes up to 40% per year.  But not everyone suffers from dementia in their old age.  Dr. Kawas spoke of a woman who died at 108 that had no signs of dementia.

Even though the risk of developing dementia is high as we age, working on our cognition skills is definitely a strong aging factor, along with  genetic susceptibility factors, alcohol and caffeine intake, being social and exercising.

What are the risk factors of developing dementia as you age?  Dr. Kawas strongly suspects the underlying factors detected prior to being diagnosed with dementia.  Her study revealed that 60% of the patients who had passed that were diagnosed with dementia also had Alzheimer’s Disease.  She also discovered that 40% of those with normal thinking had developed Alzheimer’s at the time of passing.

What caught her attention was the fact that, at younger ages, it is very unusual to have an Alzheimer’s Disease pathology and still maintain normal cognition functions, while many older individuals managed to escape the ravages of the disease.  Finding out how to tolerate the pathology and still have good thinking would be critical at all ages.

“The real heroes of this study are the subjects that so gracefully accepted us to take a look at their brain, especially after they have passed” comments Dr. Kawas.  Her research is making history, and hopefully her findings can help prevent cognitive function illness in the near future!