The Doris Howell Foundation held its first Luncheon Series with the lecture “Understanding the genome 10,000 experiments at a time: applying genomic approaches to understand autoimmune disease in women” with Sonia Sharma, Ph.D., Assistant Professor, Division of Cell Biology, La Jolla Institute for Allergy and Immunology and Director of the Institute’s RNAi Facility.

Although the title sounds intimidating,  the fact is autoimmune diseases affect women to a much greater extent than men (See Table). Currently in the US 12 million women and 4 million men are struggling with autoimmune disease; not to mention that research on autoimmune diseases in women has been scattered and unfocused, partly because of the fact that symptoms are often confused with other conditions. 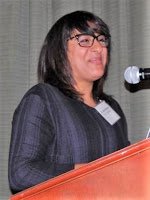 For reasons that are yet not fully understood, autoimmune diseases affect more women than men. Dr. Sharma pointed out that women have higher immune reactivity and higher numbers of certain immune cell populations.  This may result from hormonal differences between men and women.  The interactions of hormones, genetics and environmental factors make this an extremely complex area of study.

Although most people think of circulating blood cells as the primary component of immune system responses, the endothelial cells that line our blood vessels actually mount very robust immune responses when subjected to immune triggers.  Dr. Sharma hypothesizes that vascular endothelial cells are immune cells, and has focused her studies on human endothelial cells.

Because she is able to analyze all 20,000 genes of the human genome, she has been able to identify activated genes in vascular endothelial cells that are known to be associated with autoimmune diseases.  This means that such identification of the endothelial cell as a new immune cell type opens the door for novel discoveries and potential therapeutics regarding autoimmune diseases such as lupus, rheumatoid arthritis, type 1 diabetes and atherosclerosis.  Dr. Sharma, with her one of a kind technology, is uniquely qualified to make these important discoveries.

The major take away that can put the importance of Dr. Sharma’s work in perspective: out of 20,000 human genes only 260 had been identified as drug targets. She has now identified 133 additional potential drug targets through her work.   Want to do the math on pending experiments?

###
About the Doris A. Howell Foundation:
The Doris A. Howell Foundation for Women’s Health Research is committed to keeping the women we love healthy, advancing women’s health through research and educating women to be catalysts for improving family health in the community.
The organization does so by funding scholarships to students researching issues affecting women’s health; providing a forum for medical experts, scientists, doctors, and researchers to convey timely information on topics relevant to women’s health and the health of their families through its Lecture and Evening Series, and by funding research initiatives that improve the health of under-served women and increase awareness and advocacy in the community.
To learn more about the Foundation, visit www.howellfoundation.org.