The Howell Foundation held its first luncheon of the year with the presentation “Telemedicine:  Bridging the Gap Between Science and Technology”, hosting Dr. Todd Coleman as the key note speaker.   His presentation focused on merging the most recent wireless technologies to medical care.

Dr. Coleman, who holds a Ph.D. in electrical engineering from MIT, was encouraged by his mentor to go “do a post-doctoral study in something wildly different”.  He decided to start his post-doc studies in Neuroscience.  “I was happy with the opportunity to learn more about how the brain works” he commented during his presentation.

The new focus of his field of study was how to merge recent wireless technologies and biology to best serve the human being through an interactive, non-intrusive process:  how can the machine talk back to the human and engage?   By understanding how the brain works and utilizing the concepts of analytics, Dr. Coleman, his laboratory team and his many collaborators have developed computer-interfaced systems that enable a direct communication pathway from the brain to an external device – the human and the computer collaborating together to provide physicians the adequate information tools for effective and timely patient care.

Our bodies transmit pretty much everything we do through electrical signaling – even our eye movements.  Being able to “pick up” those electrical signals, gather the data to later translate the information into concrete actions through the development of a variety of patient care applications, is starting to make an impact on the way we receive healthcare treatment today.   The ability to transmit vital health information wirelessly in an effective and timely manner is starting to dictate the manner in which doctors diagnose and treat any given illness.

Going from Point A to Point B:  The not-so-long journey ahead.

Designing a technology that was flexible—rather than rigid, required the thinning of a silicon wafer to the point where it was flexible enough to move with the human body.   The circuits, which are thinner than a human hair, were integrated on top of this flexible silicon wafer. 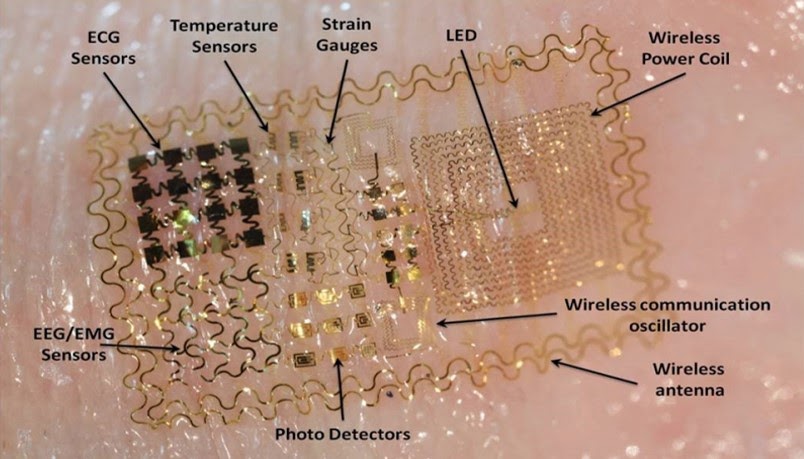 Working with Dr. John Rogers form the University of Illinois, Dr. Coleman leveraged the new system with electronic components – the top layer of each component has LED sensors, antennas, and the ability to power and transmit information, for example.   The finished product, able to fully integrate itself to the movement of the body is capable of detecting the body’s temperature, blood oxygenation, electrical rhythms of the brain and body, or EEG; to name a few.

On the importance of neonatal care, the ability to detect brain injury through seizures within ten hours or the baby’s birth is crucial to detect and aid recovery from brain injury.  Being able to monitor the baby’s brain activity with non-obtrusive technology gives the caretaker the ability to manage any problem that might arise immediately.  The applications of the technology are currently being tested at UCSD’s neo-natal care facility with the collaboration of Dr. Sandy Ramos, who specializes in reproductive medicine and with Dr. Mary Harbert, one of only 30 neo-natal neurosurgeons nationwide,  both with great results.

On chronic pain management, the technology offers the possibility of analyzing and offering corrective posture measures based on brain signaling that stem from repetitive processes that affect our posture and that more often than not are the cause of arthritis and chronic pain, especially in the neck area.

But the development and application of this new tool in healthcare doesn’t stop there and, in fact, takes full advantage of the smart phone use worldwide.  Anywhere from assisting a mid-wife a thousand miles away in a developing country, to the possibility of a wheel chair-ridden stroke victim to determine where his wheel chair needs to go – either left or right—based on the electrical signals from the brain, to the option of having an app on your phone capable of taking and transmitting ultrasounds without depleting the battery of your phone are leading the path in newly, heavily funded projects.

“Anyone who understand the true meaning of collaboration and mentoring detected immediately the gracefulness of Dr. Coleman in acknowledging and recognizing the work of his fellow laboratory members, which I thought was truly inspiring”, comments Carolyn Northrup, attendee of the presentation.

Accompanying Dr. Colman during the luncheon were undergraduate Amanda Beck who works on a project to minimize the risk of injury for surgeons due to bad posture and repetitive motions which is of particular concern to women surgeons; and Gladys Ornelas, also an undergraduate student, who is involved in using flexible sensors to monitor brain injury in newborns and to monitor patients with Parkinson’s Disease.

“We are excited to have women undergraduate student researchers working with women medical doctors on the process of getting new technologies in the hands of medical practitioners so better decisions on health can be made” comments Dr. Coleman.

“Being supported and promoted by a mentor who is giving them access to extraordinary research is an opportunity that few undergraduate students ever experience”, comments Dr. Carole Banka, Chair of the Howell Foundation.

A long history of cross country collaborations with experts such as Dr. Muriel Medard, Dr. Emery Brown, Dr. Elaine Tanaka, Dr. John Roberts, Dr. Mary Harbert, Dr. Sandy Ramos and, of course, a very diverse team of doctors and researchers at the Coleman Laboratory at UCSD have enabled the technology to take center stage.  Local chipset manufacturer QUALCOMM is just an example on how this technology is creating an impact on the way tech companies and developers manufacture their products.

As for the future, a local company –Airstrip, is currently in the development stages of a clinical healthcare mobile solutions application.  Google, Amazon and Intel have also provided in-kind donations that allow Dr. Coleman and his team of experts to continue researching the possibilities of wireless technology in the field of healthcare.

The Doris A. Howell Foundation for Women’s Health Research is committed to keeping the women we love healthy, advancing women’s health through research and educating women to be catalysts for improving family health in the community.

The organization does so by funding scholarships to scientists researching issues affecting women’s health; providing a forum for medical experts, scientists, doctors, researchers, and authors to convey the timely information on topics relevant to women’s health and the health. of their families through its Lecture and Evening Series, and by funding research initiatives that will create women’s health awareness and advocacy in the community.