2019 was another sad year for the Foundation. Peggy Oechsle, women’s health champion and Emeritus Board Member passed peacefully in December. An avid supporter the Howell Foundation, Peggy Oechsle served as Howell Board Secretary for over 23 years! 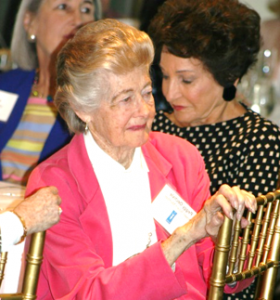 One can’t visualize Doris without Peggy. Irving Tragen, Former Board Member and friend, remembered her lovingly: “Peggy was a devoted, dedicated person, who became the indispensable companion and aide to Doris. All of us carry with us the image of Doris and Peggy together. I was privileged to be with them and watch how Peggy complimented Doris as she helped her carry out those special activities that made Doris an internationally renowned advocate of women’s health and civic leader. It was Peggy who helped Doris dot the “i’s” and cross the “t’s”. It was Peggy who made certain that Doris was in the right place at the right time. It was Peggy waiting to take her home safe and sound.

I was a frequent third person occupant of Peggy’s car. Those car rides were something special—for Peggy loved to drive fast and change lanes whenever she despaired of the laggard driver in the car ahead of her. As Peggy told me, ‘I had a flying license before I was legally able to obtain a driver’s license.’ And she often confused her car for an airplane!”

Her passion for art.

Peggy was known for her unbelievable talent as an artist. She was involved in many forms of fine art, even during her professional careers in the airline and medical fields. She obtained her formal art education from the University of California, Santa Barbara and Otis Art Institute, Los Angeles.

Peggy’s artistic recognition was in metal sculpture, woodworking, photography and acrylic painting. Her sculptures are in private collections throughout the United States. Her many 4’ x 8’ acrylic panels of storybook characters were displayed for years throughout the Pediatric Department of the Medical College of Pennsylvania in Philadelphia. For many years the children of the UCSD Hillcrest Primary Care Center enjoyed a 4’ x 4’ wooden “Busy Board” designed and built by Peggy. Also approximately forty greatly enlarged photos were displayed in the corridors of the UCSD Outpatient Center and Ambulatory Care Center for many years.

Although she continued her work in wood and metal sculpture, her primary focus turned to Chinese Brush Painting, with watercolor a secondary focus. Her Chinese Brush paintings have shown in shows in San Diego as well as in Los Angeles, Scottsdale, Arizona and Taiwan.

Peggy studied with many well-known artists in Chinese Brush and Watercolor, including Ning Yeh and Grace Chow (both Chinese Brush), Robert Landry, Robert Wood and Joan McKasson (all watercolor), and Cheng Khee and Chee (both Chinese Brush and watercolor).  Peggy was a member and Past President of the Chinese Brush Painting Society of San Diego and the La Jolla Art Association. She was a member of the San Diego Watercolor Society, American Artists for Chinese Brush Painting and the Fine Arts Society of North County. She showed in the Artists’ Gallery of La Jolla during its eight-year existence. Her works are currently shown online at art-exchange.com and Timothy’s Fine Arts. the Pacific Regent’s Art Wall, and were shown at the San Diego Hospice and Institute for Palliative Medicine.

Her wisdom, sense of humor and encouraging words are missed!