It was at the end of 2012 when the Howell Foundation awarded its first Community Engagement Initiative Award, “For our Health”.  The aim of the study was to pilot test the impact of a physical activity intervention on the physical activity practices of pregnant Latinas. Considering the important influence of family and friends in Latino culture, a social support approach was utilized to develop an intervention that targeted individual, social, and cultural influences on physical activity.
Since the Howell Foundation Community Engagement Initiative was launched in 2012, a sub-committee led by Camille Nebeker (Foundation Board Member and member of the UC San Diego Family and Preventive Medicine faculty) has developed and tested procedures for the CEI grant application and review process.  The application is modeled after the National Institutes of Health (NIH) mechanism to initiate collection of preliminary data necessary for most large grant proposals. Likewise, the application review process engages academic researchers from local universities who provide a critical review and score each proposal according to established criteria.  Proposals are assessed for their impact on women’s health, strength of the academic-community partnership, potential for sustainability, research design, investigator qualifications and feasibility of accomplishing study goals.
Women’s health awareness starts with research, and funding women-focused health studies provides the insight to create the educational tools necessary to promote women’s health advocacy. Our partnership with SDSU and UCSD faculty will lead to advances in women’s health and allows women’s health awareness to be disseminated in the community.
Below an excerpt of the study’s results, delivered by Sandra Soto, MPH, BSN, during the Howell Foundation’s 20th anniversary celebration. 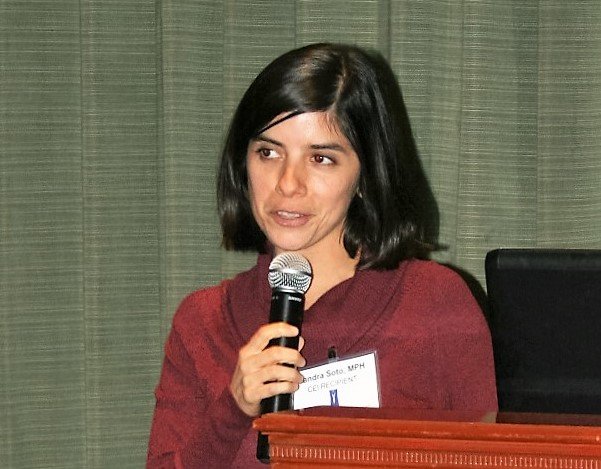 Physical activity is recommended during pregnancy because of its health-promoting effects on pregnancy and delivery. However, physical activity levels tend to decline during pregnancy.   Our study evaluated the feasibility and preliminary impact of a 9-week physical activity intervention among low-income, predominantly Latina women.  Pregnant women were recruited from two Women, Infants, and Children (WIC) offices in San Diego County. The intervention was led by promotoras (community health workers). Components of the intervention consisted of nine weekly, one-hour sessions and two optional walking groups per week. Each weekly session included time for physical activity in the form of strength training, stretching, and aerobics; goal-setting; and discussion of physical activity-related topics. Participants also received a physical activity monitoring device (Fitbit ZipTM) to monitor their activity throughout the week. The comparison group consisted of women who were invited but did not attend the intervention. These women were mailed printed intervention materials following the end of the intervention. Pre- and post-intervention measures included an accelerometer worn for 3-5 days and a survey.
Recruitment occurred between July and December of 2014, primarily from two WIC offices in San Diego and Chula Vista. Research assistants distributed 1,276 fliers through in-person recruitment in WIC waiting rooms and mailed fliers to 462 pregnant WIC participants. Of the 1,964 fliers distributed, 141 (7%) of women who received fliers expressed interest in the program. We were able to contact 115 of these women and screen them for eligibility. Of the 21 eligible women who were invited, 12 participated in the study. Seven attended the intervention and five did not attend the intervention.
Post-intervention, women who attended the intervention had a 7% increase in total physical activity versus an 11% decrease in the comparison group. Although there was an increase in leisure-time physical activity among both groups, the group who attended the intervention increased by 157% versus only 31% in the comparison group. Women who attended the intervention reported that the most important reasons for attending were to obtain information about physical activity and to prevent excessive weight gain during pregnancy. The most frequently reported benefits from attending the intervention were receiving support for physical activity, followed by personal and health-related benefits.
Although recruiting pregnant women from WIC was difficult, conducting a physical activity intervention in WIC offices among a low-income, predominantly Latina sample was feasible and has the potential to maintain, if not increase physical activity during pregnancy. Our study was disseminated as a poster presentation at the Hispanic-Serving Health Professions Schools’ Professional Development Workshop in June 2015, will be disseminated as a manuscript in a peer-reviewed scientific journal, and will be used to develop a larger grant proposal to the National Institutes of Health.
Finally, this study involved six female students representing various academic levels (undergraduate, masters, doctoral), across a variety of disciplines (public health, biology, psychology), and across universities (SDSU, UCSD). These students developed essential training in research by assisting with the development and implementation of the study.
###
About IBACH:
The Institute for Behavioral and Community Health (IBACH) was established in 1982 for the purpose of promoting research and academic programs relevant to the applications of behavioral science principles to medicine and health care. This interdisciplinary institute includes a focus on community interventions and attempts to promote and foster active collaboration by researchers and community partners from many different specialties and institutions, including the University of California at San Diego, UC San Diego Moores Cancer Center, San Ysidro Health Center and Clinicas de Salud del Pueblo.  IBACH also provides important research experience to students who intend to pursue related careers and offers opportunities for project staff and graduate students to participate in community interventions.

About the Doris A. Howell Foundation:


The Doris A. Howell Foundation for Women’s Health Research is committed to keeping the women we love healthy, advancing women’s health through research and educating women to be catalysts for improving family health in the community.


The organization does so by funding scholarships to scientists researching issues affecting women’s health;   providing a forum for medical experts, scientists, doctors, researchers, and authors to convey the timely information on topics relevant to women’s health and the health of their families through its Lecture and Evening Series, and by funding research initiatives that will create women’s health awareness and advocacy in the community.


For more information about the Doris A. Howell Foundation, please visit www.howellfoundation.org.