In March, the Howell Foundation hosted Sonia Ancoli-Isael, Ph,D to present the science behind sleep and its impact on the health of  aging women. “The Importance of Sleep in Aging Women: Why can’t Grammie Sleep?” focused on the need vs. the ability to sleep in older adults, the consequences of poor sleep and the co-morbidities often associated with it, the primary sleep disorders that are common in older adults, and importantly, the cardinal rules for a good night’s sleep.

Dr. Ancoli-Israel is Professor Emeritus of Psychiatry and Center for Circadian Biology at UCSD. Her expertise is in the field of sleep disorders and circadian rhythms. Her research has included studies on the longitudinal effect of sleep disorders on aging, therapeutic interventions for sleep problems in dementia, and in the relationship between sleep, fatigue and circadian rhythms in cancer. 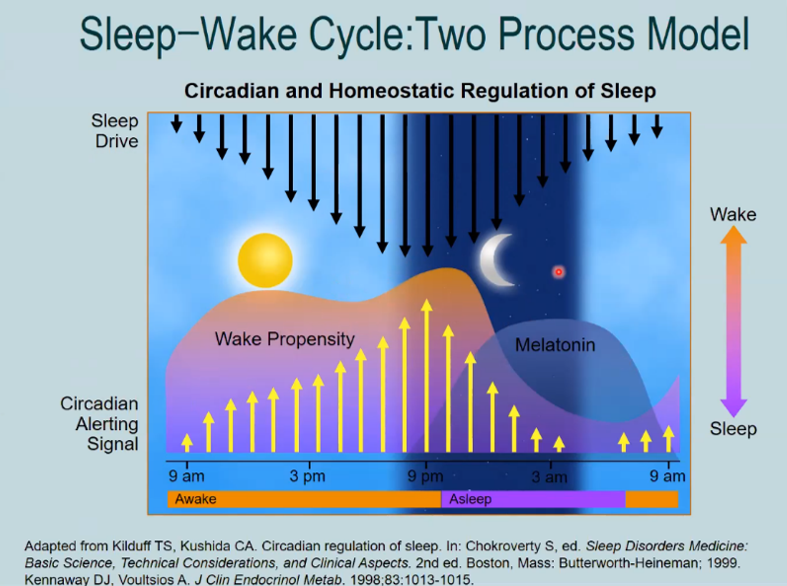 . Ancoli-Israel started her presentation by explaining the sleep-wake cycle.

Sleep is regulated by the need to sleep (drive) and the body’s circadian systems –biological rhythms that are perfectly balanced in a 24-hr span – and drive the waking-sleep times. Sleep drive in the morning is low, and increases throughout the day. The production of melatonin and the body’s core temperature start dropping towards night time, and play a critical role in the sleep-wake model. If any of these factors are imbalanced our sleep becomes disturbed.

How does sleep change as we age and how does it relate to our ability to sleep?

There are changes in sleep as we get older, specifically during deep sleep, or slow wave sleep. The amount of sleep needed in adults and older adults is seven to eight hours of sleep.

Sleep starts decreasing around age 30, contrary to the popular belief that older adults need less hours of sleep. In reality, all adults have slow wave sleep. Furthermore, data shows that the need for sleep is not necessarily changing. Older adults are still sleeping as as much as when they were younger.  65 different studies with over 3,500 individuals concluded that, in healthy older adults, sleep remains fairly constant from age 60 on – around 7 hours. The change in sleep patterns is dependent on the body’s circadian rhythms. Scheduling plays a significant part in sleeping patterns: if we go to bed later, we’ll wake up later; the earlier we go to bed, the earlier we’ll wake up.

Are sleep disorders a consequence of aging?

No, sleep disorders are NOT a consequence of age, but rather a reflection of external circumstances surrounding us as we age. These include medical and psychiatric illnesses, medications, changes in our circadian rhythm, and primary sleep disorders such as insomnia or sleep apnea.

Looking at the relationship between medical illnesses and sleep, research shows that the more medical conditions in an individual, the higher the occurrence of sleep disturbances.  “Pretty much any condition that has discomfort associated with it is going to be associated with poor sleep. Often, people think that fixing the pain will automatically improve sleep. And that’s not the case. These are concomitant conditions. You have to treat them both at the same time in order to get improvement in both.”

Medications and substances play a role in sleep patterns: “Any drug that crosses the blood-brain barrier and affects a neurotransmitter system may be associated with insomnia,” comments Dr. Ancoli-Israel. Among the culprits in the list: alcohol, caffeine, nicotine and specifically prescription medications (antidepressants, corticosteroids, decongestions, beta agonist, and antagonist statins). “All these drugs are known to be associated with poor sleep. A positive impact in sleep can be achieved by just adjusting the dose to the lowest possible dose, or adjusting the time of day that medications are taken.”

What are the sleep patterns in women, compared to men?

The National Sleep Foundation polled American women 18-64, and found that, although women report sleeping around 6.5 hours per night –between eight to 13 more minutes a night than men – 60% of women reported getting only a few nights per week of good sleep:

The major health conditions affecting women due to poor sleep

Dr. Ancoli-Israel presented data from the Study of Osteoporotic Fractures, a 3000-women study with a median age of 83.  Although the study focused on the risk of osteoporotic fractures for aging women, researchers were also able to collect data on poor sleep efficiency and its relationship with an increased risk of cognitive decline.

“Less than 70% sleep efficiency, –taking more than 30 minutes to fall asleep during the night or spending 30 minutes or more awake during the night, for example– were all associated with one to two times the risk of poor cognition.”  Additional consequences of poor sleep include:

As for osteoporotic fractures, the study found that there was a 30 to 40% increased risk of falls in older women who slept less than seven hours a night, or had a very low sleep efficiency, thus increasing the risk of mortality in aging women.

Sleep apnea is particularly concerning for women in the menopausal and post-menopausal stages, as there is a higher risk of dementia or a decline in cognitive function. A cross-sectional study of 400 women showed that the higher number of times a woman woke up in an hour due to breathing cessation caused by sleep apnea, the higher the risk of developing cognitive impairment.  “Stopping to breathe at least 15 times per hour of sleep, not per night, but per hour of sleep, is associated with a one and a half times risk of cognitive impairment. The risk increases to three and a half when stopping to breathe more than 30 times an hour per night.”

Dr. Ancoli-Israel recommends cognitive behavioral therapy as the best, most effective treatment for poor sleep conditions leading to insomnia. “Cognitive behavioral therapy is much more effective than any prescription or non-prescription medication. There were smaller improvements in our sleep with physical exercise, some anti-depressants, yoga, and hormone replacement therapy. I want to point out that Omega three supplements did not have any effect on the insomnia at all.”

Recommendations –her cardinal rules– to promote healthy sleep habits include:

“No matter the age of a woman, sleep disorders should be treated if they are interfering with your quality of life, especially is there is a medical risk associated with it” concludes Ancoli-Israel.

The Doris A. Howell Foundation for Women’s Health Research is dedicated to making a long-term, positive impact on women’s health. We help keep the women we love healthy by raising the importance of scientific research specifically dedicated to the most pressing issues in women’s health.