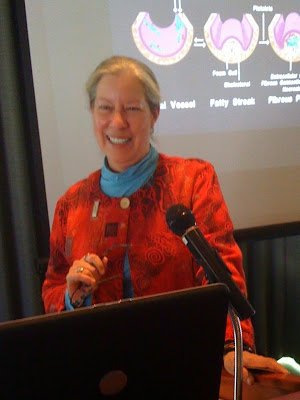 As National Heart Health Month is here, it only seemed appropriate to sit and chat with Dr. Carole Banka, recently elected Chair of the Board of Directors for the Doris A. Howell Foundation.

Carole L. Banka, Ph.D is currently Associate Project Scientist in the Department of Medicine at the UCSD School of Medicine.  She received her Ph.D. from UCSF School of Medicine and did postdoctoral training at UCSD School of Medicine and The Scripps Research Institute. She has held faculty positions at The Scripps Research Institute and the La Jolla Institute for Molecular Medicine where she was Director of Women’s Health Research. Her areas of research include heart disease, fat and cholesterol metabolism, menopause, breast cancer and reproductive biology.  She was a co-author on the American Heart Association’s seminal “Evidence-based guidelines for cardiovascular disease prevention in women: 2007 update”, one of her 40 publications.  Her research has been funded by the National Institutes of Health (NIH), the Department of Defense (DOD breast cancer program), the California Breast Cancer Program and the American Heart Association.

Dr. Banka has received numerous awards for her public speaking on women’s health issues and gender differences in health and disease, including the “BRAVO” Award from the National Association of Women Business Owners and the “Women of Achievement Award” from Soroptimist International. In addition, she has received a Leadership Award from the American Heart Association.

On the need for including the gender difference factor in research, she comments: “A principal problem in women’s health today is a ‘one-size- fits-all’ approach.  Even if it seems that our bodies function the same way mechanically – for example the heart or the brain- you’d be surprised how important gender differences are in the prevention, effective diagnosis and treatment of illness in today’s world.  Heart disease represents a perfect example in that women often have different symptoms, they may be treated less rigorously than men with the same risk factors and they have a poorer outcome than men following cardiac surgery.

”Thus, by failing to include female subjects in the same proportion as males in clinical trials, we fail to identify key differences and women are then diagnosed and treated the same as men.   Most of us have heard of the prescription sleeping aid, Ambien.  The new FDA mandated practice of prescribing half the dosage for women is an excellent example of the need to include females in clinical research.”

Dr. Banka has been involved with the Doris A. Howell Foundation championing women’s health for the past eight years, first as a speaker and then as a board member. When questioned about her commitment to the organization, Dr. Banka first mentioned her respect and admiration for Dr. Howell. “She has been both a mentor and an inspiration for me,” says the new Chair. “I was first attracted to the Foundation due to its outreach activities. Educating the public as to the latest research findings and their application to the everyday patient has been a passion of mine for all of my research life. The scholarship program and the Community Outreach grants were icing on the cake for anyone interested in promoting women’s health research.”  In the words of John Heywood “Nothing is impossible to a willing heart”. And her heart is in creating women’s health research awareness in our community through the Doris A. Howell Foundation.

In her spare time, Dr. Banka loves to travel, participates in several book groups and enjoys watching her three grandchildren blossom into real people. Last Fall she walked more than a third of the 500-mile Camino de Santiago in Spain.  Her heart was fine!